Can blockchain technology be used to provide objective and affordable insurance to poor farmers?

Agriculture is well known for being a volatile industry; with both capricious economic and geographical climates posing multiple threats to today’s farmers, many of whom, as a result, struggle to make ends meet. The paucity of accessible and affordable insurance has meant that farmers in poorer areas of the world have been well and truly at the mercy of mother earth. So, for those who farm in harsh climates, a drought can be life-threatening, not only for the crops and livestock which they farm, but also for the farmers and their families.

This is where companies like Sprout an insurtech come in; they have developed “smart contracts” using distributed ledger technology (blockchain) to simplify the insurance process. The startup target market is already sending and receiving money via mobile payment services, so this has provided these companies with the necessary infrastructure for automated blockchain based insurance technology.

Launched in 2018, the German-based startup use technology to increase the crop insurance coverage rates of smallholder farmers in sub-Saharan Africa, where less than 3% of farmers have access to this kind of services.

Despite the technology underpinning Sprout being quite complicated (blockchain technology and machine learning), their product is amazingly simple, flexible and accessible; a crucial quality when doing business in rural areas where literacy levels are extremely poor. Essentially the company can cut through the notoriously bureaucratic insurance claim system by ensuring insurance payments are automatically triggered once certain conditions are met, therefore increasing efficiency and eliminating fraudulent requests. 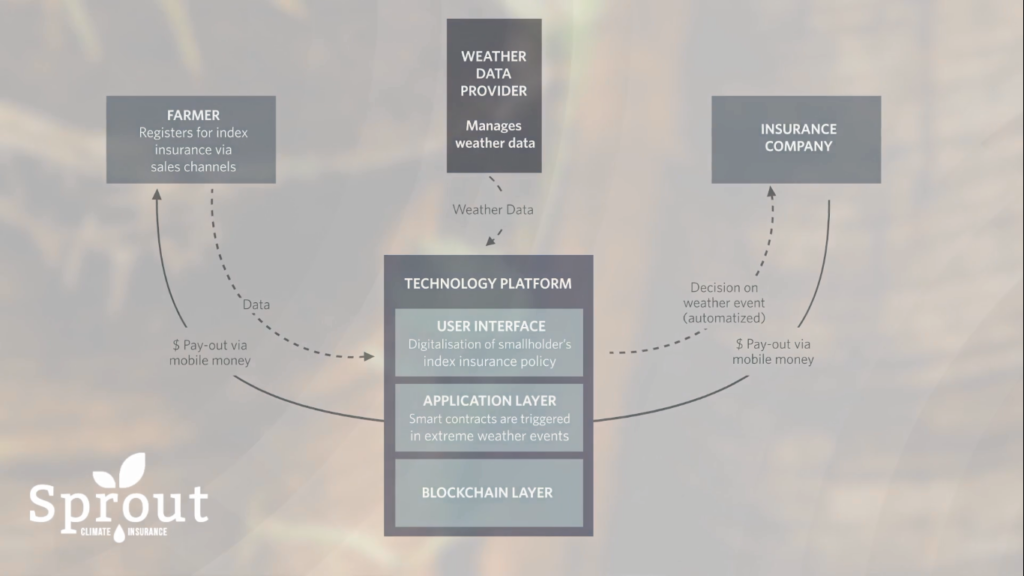 As it stands, Sprout only offers weather insurance and their focus is to build resilience for farmers using climate change adaptation protection. Which will lead, to increase food security and livelihood for developing agricultural communities.

There are other similar ventures being set up worldwide with the goal of also using blockchain technology to increase the efficiency and inclusion of agricultural insurance; Etherisc, a company that has built a platform for decentralized insurance applications and that aims to “use blockchain technology to help make the purchase and sale of insurance more efficient… and democratize access to reinsurance investments,” has partnered with Aon and Oxfam to develop a blockchain crop insurance system in Sri Lanka.

The objectives of the initiative are insurance coverage and financial assistant in cases of crop damage (wheatear, diseases, and pests); increase the income of farmers; and encourage innovation in agriculture.

Under the scheme, farmers were required to pay only 2% of the premium expenses, with the rest being absorbed in equal measure by the central and state governments. Whilst the uptake was by no means a failure with more than 56 million people signing up for the scheme between 2016 and 2017.

Nevertheless, there have been nationwide complaints about the efficacy of the programme. The main cause of the grievances being that farmers’ insurance payments are often delayed, with some having to wait up to 18 months for payment. This not only poses a problem on a personal scale; for the farmers and their families, but also for Indian agriculture, as a lack of confidence in short term prospects will inhibit long term investment, therefore stagnating the industry.

India has been targeted as a prime candidate for parametric insurance, as the idea is already there; it just needs better implementation.