Monzo is a UK challenger bank that has been making headlines as one of the UKs top FinTech banks. Although many of these FinTech banks have adopted a transparent communication aspect, this is where their social good usually ends. However, Monzo is setting an example by adding some social features and attempting to move their trajectory onto a more positively impactfal path.

One feature which Monzo added was a gambling ban. It was estimated that around 15% of Monzo’s customers have a gambling problem. Therefore to combat this they added a feature that would block any transactions to betting companies. But can’t you just take off the ban and do some betting? Well yes, but the process has some “positive friction” which allow the user opportunities for some self-reflection.

In order to lift the betting block, you have to call in and talk to someone at Monzo. They’ll talk through your decision making process and why you want to take the ban off. Then if you decide you still want to, there will be a 48hr gap. After this 48hr countdown, you will be given the permission to unblock the ban via the app. You are able to put the ban back on at any time. The process has human elements which allow you to rethink your decision. Furthermore, the 48hr window allows you to recognise if it was a compulsive decision. The feature has been a success with over 140,000 people using it. The feature has gotten a lot of praise by its users.

The gambling feature wasn’t on their original roadmap. The idea was conceptualised during “Monzo Time“, this occurs on the last friday of each month. It’s a day in which the product teams work on projects and ideas they’re passionate about, but are not on the roadmap. A team of engineers, a designer and the vulnerable customers team collaborated in order to make the gambling block feature happen.

Each new employee at Monzo gets a vulnerable customers training, this is re-taken yearly. Monzo doesn’t believe that vulnerable customers have a strict definition e.g. only those suffering from anxiety or stress. They could “have a history of gambling addiction, or maybe they recently lost a loved one, or perhaps they have dyslexia, or recently broke a leg and are having trouble with daily mobility – there is no strict definition, other than someone who is in a position of vulnerability and may benefit from added support.” The team is trained to spot these customers, not solely relying on self-disclosure. They then brainstorm how to make Monzo work better for them, and integrate their solutions into the app.

Since Monzo’s gambling block success, they’ve also been working on creating a merchant block. An example being, if you work right by a McDonald’s and have spent too many lunch breaks eating their fast food, you could add a McDonald’s block. Monzo is also wanting to add a fast-food block by grouping these similar merchants. They said that an alcohol block would be tricky as Monzo doesn’t get access to the actual receipt. Meaning that customers could purchase alcohol with their food shop, at any type of restaurant that sells alcohol, then of course you could pay in-person by cash and bypass it as a whole…

The reality is that one in four adults (in the UK) face a mental health challenge every single year – our ambition is to be a bank that works for billions of people worldwide, and ignoring the potential needs and struggles of 25%+ of your user base is not only irresponsible design, but a foolish business decision.” –  Zander Brade: Lead Product Designer at Monzo 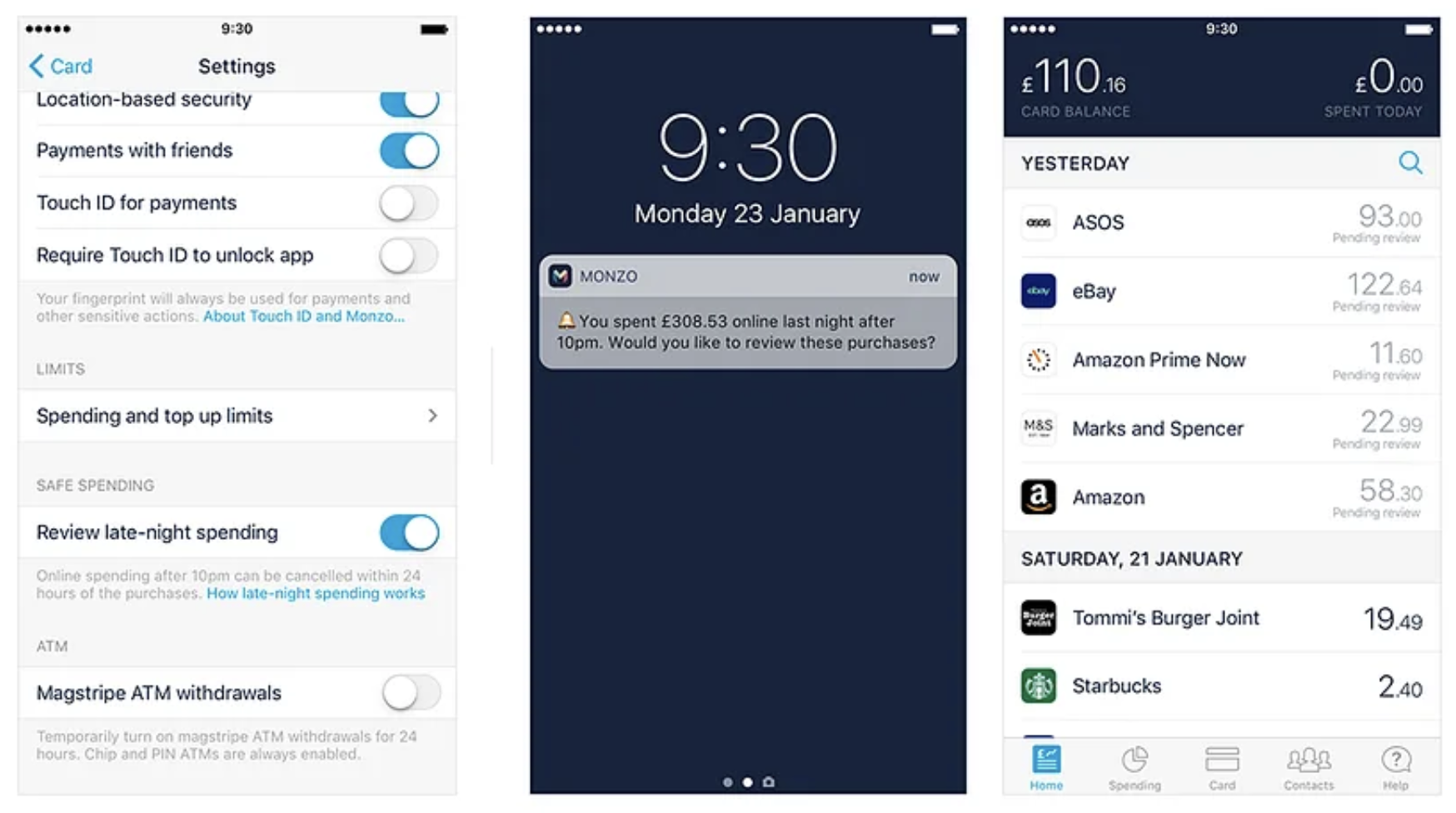 It is common knowledge that money problems can have an effect on ones mental health. Being in debt can cause a lot of stress as people can’t see a way out. Similarly, mental health problems can cause a problem with money. Monzo has implemented a “review late night spending” toggle. Monzo had found out that people with mental health problems would compulsively shop for things they didn’t need late at night. Then, in the morning they would be hit with a large bill and feel the consequences. Monzo has been working on a toggle feature which allows you to double check in the morning whether you really need that online purchase.

“Granted, there are some forms of online purchase that cannot be revoked, but for those where that is a possibility (whether it be through immediate cancellations or even just product returns), Monzo has your back, and is present to safeguard our most vulnerable customers when things go wrong.” – an excerpt from a Monzo blog post about their mental health initiatives.

Monzo can also exclude you from certain products such as overdrafts or credit, in addition to stop marketing these products to you. Lastly, they have worked on assigning a designated carer to overview the spending habits of those with compulsive purchasing problems. They can be sent notifications of your spending and require their approval for big ticket items.

It should be noted that some of these features may still be in beta phase, or only available once being in contact with Monzo about your situation.